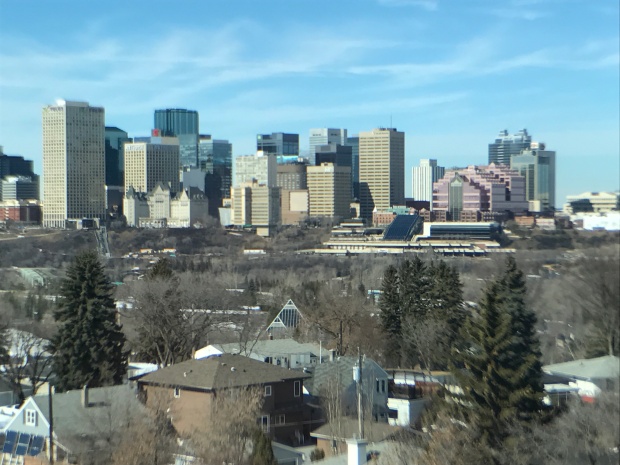 The streets of Edmonton, where I live can be cold and unfriendly. Many people fall into a trap of  being struck down by mental or physical illness, then addictions and eventually homelessness. You see it a lot where I live, makeshift tents with a shopping cart full of garbage nearby. Long line-ups at the soup kitchens and shelters. When oil was at a peak, people came from all over wanting to take part in the prosperity, the huge amounts of money to be made in the oilfields and in Edmonton in some of the numerous supporting industries from plastics to catering. It is almost sickening to think of what all the fossil fuels are doing to our once pristine and beautiful country, yet fracking and pipelines continue. When I was in eleventh grade, a friend was trying to encourage me to get a job in the oilfields. My ambition then was to be a lawyer, I found his idea almost laughable now, especially since he went on to become an alcoholic working under the table so he didn’t have to pay child support. When you take a long look at all the big money jobs in the oilfields, it just doesn’t seem worth the real price in loss of quality of life and many other factors. I know of so many dreamers who became homeless, addicted, mentally ill. A lot of organizations have tried to fill in the gaps left when people have nowhere else to go. From New Year’s Eve 2001 to the present, I have been living in supportive housing and despite the books I’ve written, the work I’ve done, the money I’ve made, I really don’t think I could have done any of it without living in places that supported me through my difficulties with bipolar and schizoaffective disorder.

When I last got out of the hospital, my life was destroyed. I had lost control of any finances, I was heavily medicated, and virtually unemployable. A long-term group home was found for me and I was able to recover almost completely. I still have troubles with sleep and stress, I still have times when I question my own existence or allow myself to get angry over things I can’t control. But none of those things can destroy me anymore, I have been allowed to grow new skin over my wounds.

Living in a group home had a number of advantages for me. I lived in a house with three other people, and though there were arguments and fights, and even people who did horrible and disgusting things, the needed stability was there. One time I was in a house with a barely functioning, overbearing bully who kept trying to order me around and pick a fight with me. I had to deal with him by calling the police one night and when I talked to them I didn’t have a chance to mention that he is in the habit of picking fights, losing them badly and then going to an organization called ‘victim’s services’ where he is given money in exchange for proof of his injuries. Another roommate in the same house once called the police and confronted me because I had woken up late for work and took two slices of a cold pizza he had left out in the kitchen because he had put it in the oven and was so drunk he forgot about it.

The thing though, was that when you live with others who suffer from a mental illness, the stigma and guilt are greatly reduced, and provided you are on the medication you need, it is so much easier to function, so much easier to heal. In the group home I lived in for 15 years, medication was given out each day. Adherence to all appointments was necessary. I had the benefit of having my dad come and take me for a walk in the park also which was extremely healing. There were a lot of difficult times with people who lived in the group home. There was one guy who believed that he could legally play his music as loud as he wanted as long as he turned it down a little after 11:00pm. I dealt with it by simply going to the basement and shutting off the breaker for his room, leaving him in silence and darkness. Then the management passed a rule that we weren’t allowed to touch the breakers. Soon, my roommate was playing his music again and I shut him down once more from the breaker switches and then plead my case to a higher authority. The same guy had a habit of coming home from work and turning up the heat as far as it would go, then taking off his shirt in the living room and laying down to watch TV. That was around the time I took up the habit of hiding the remote. Then, when he found it, I would insist he give it back to me as it was legally mine, then when I got it back I would turn the TV off. I had to find ways to amuse myself somehow.

It was an eye-opening experience to live there. For perhaps the first time in my life I could simply exist. I didn’t need to be some wealthy young entrepreneur, I didn’t need to be an A+ honour student on his way to Oxford, I just had to exist, take my medication, and hopefully not kill any roommates. I found out that housing like this, which is in extreme demand these days, costs about 1/4 of what a hospital bed costs the health care system. I have also heard information about how homeless people, job or not, cost society a great deal as well. I can see why because, to use one example, a shelter needs a lot of resources. They need food, staff, a constant inflow of donations of money, clothing, heat, security. I worked at a drop-in centre that didn’t even have any beds for homeless people and it seemed they had nine paid staff or volunteers supporting, educating, counselling, and even motivating the many people who relied on them. I guess I just wanted to say that in many places in North America, cold weather, extreme in some places is coming fast. Consider gathering up unneeded items, especially things like hoodies, toques, gloves, scarves, and finding a charity that would be extremely grateful to be able to distribute them for you. Something I have seen happen a lot is that people will put warm clothing items onto a tree or fence with a note saying that anyone who needs to warm up can take the item. Excess household items like books and furniture are needed at many thrift shops that support worthwhile charities. Consider also volunteering your time (if a place exists near you) with a schizophrenia society office, or finding ways to help integrate disadvantaged people into the greater community. This time of year is ideal for looking for ways to give back as many students get a Christmas break, and most charities need volunteers at Christmas, which they recruit in October and November.

Sadly though, all of these great ideas doesn’t change the fact that a lot of people, whether they read this blog or not, suffer themselves from a mental illness and don’t have the housing or the support or even the medical attention they need, and many of them are all alone in this world. I can’t imagine what things may have been like if I didn’t have my dad and my sister to advocate for me last time I was ill. To people in this situation, I just pray that they can plant a seed of hope deep inside of their minds. Just enough so that they can get to a clinic and find a way to get the assistance of a psychiatrist, find a way to get their medications. I know that in the US it is much harder to get by as a poor person, but I have also noticed from my own experience that once people see you are trying to take responsibility for yourself, trying to improve your own life so you can perhaps one day help others, they are more than willing to support you in your efforts to recover. One thing I would say is that there are opportunities to dig yourself out. There are things like newspapers that homeless people sell by donation, and if these don’t exist, approach your library and get them to help you put together a booklet of writing about people who are struggling in so many ways. Charge a buck or two and use the money for the essential things the group needs.

I wish I could keep writing. I also wish I had all the answers. But the sad fact is, each person who is ill, each person who is addicted or homeless, needs to find their own way. I found mine with the help of people who cared and loved me back to sanity. I wish this for all of you.