Well, today has been a great day to say the least.  Last night I went out with my Dad and watched a movie that was based on a popular book called “The 100 Year-Old Man Who Climbed Out the Window and Disappeared”.  The movie was literally a non-stop laugh riot and I think in a way it made my Dad, who is only 23 years away from 100, feel good about himself.  The movie was Swedish and had a lot of subtitles, but much of it was in English.  It followed the adventures of an old man who had been put into a home for having the odd hobby of blowing up things, and I think I could best describe it as a Swedish Forrest Gump.  I thought it would be kind of cool to put in a photo of one of my best friends who is getting up there, but not quite near 100 yet either.  I used a black and white setting on my camera and I think it comes up with a pretty nice rendering of what Walter is like.

Aside from all that, I sat down today and wrote a poem.  I have been having misgivings lately about putting poems up on this website, because in all reality, it doesn’t do me much good and although I get a lot of hits on this page, I don’t sell any books.  The fact of the matter is, in order to make any money off your writing, you need to get a following first and convince them that your writing is worthwhile (or so I hope it works that way).  After a couple more pictures which are in sharp contrast to each other (one is the winter skyline of Edmonton, and the other is of a shark I took a picture of in the aquarium in Hawaii), I will put my poem in for you to read.  Thanks for being a part of my website, I welcome any comments anyone would like to leave. 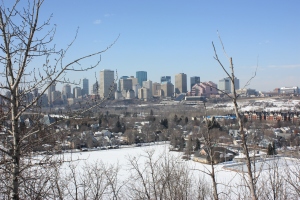 Can it be; can it be true

That this very place will be my tomb

This, my warm writing room

Outside it’s so cold

Somehow the howl of the wind

I can see from my window

Off in the sky, that deep northern sky

I keep wondering why

It must blow so chill and so harsh

I will never go

From this place, the only place that I know

The snow, the snow being driven by wind

Finds me sealed inside

My furnace guarding me; keeping me warm

Free from all harm

But still there beckons a charm

Inside my chest beats a heart

That was made for this place from the start

That longs to make snow angels

Get a toboggan or an inner tube

Inside my chest beats a heart

That was made for this place from the start

That needs to head to a mountain

Those peaks that seem to not know any bounds

To take up my skiis and my hopes

To blast down their slopes

Run myself ragged and cold

Then hide away in some small bustling chalet

With all of my friends who come out on these days

Sip on some chocolate laced with a marshmallow floating

Look at the athletic young women and their young boyfriends gloating

Some say that this season makes all of us sad

Oceans to swim in and beaches to inspire

But I can’t leave this place, this place of which I never will tire

Too much adventure, too much to be had

Too much to sit in the dark

In my writing room

Of things I wish I could do